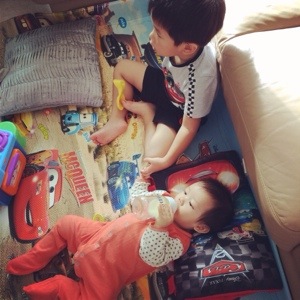 Scenes like this absolutely melts my heart. I had zero idea of how having 2 children would pan out to be. Z was such a generous hearted soul and he loved his little brother X with so much zest.

While there would be times when Z wanted to take something away from X, he would usually ask,”X, kor kor take this ok?” He, of course, assumed agreement on X’s end. X would either be in a daze or nonchalant about it. However, I made it a point to remind Z not to always take things away. X could not retaliate now but that did not mean he would not in future.

X had his demanding times and Z would usually oblige to the point of over giving in. X idolized Z and it was evident in his adoration. He always laughed appreciatively when Z played with him. He definitely was not taking his brother’s attention for granted.

Most of the time, when Z imitated me to tell X off, X would also pause to listen and oblige some times.

They made such a charming and sweet team. We were so blessed to have them and so lucky that they loved each other as much too.

Like Loading...
This entry was posted in Happiness, Hugs and tagged brothers for life, X, Z. Bookmark the permalink.