The cycle of speaking went like this for Z:

By 18 months’ old – He was well acquainted with the names of Thomas & Percy.  He was mouthing singular syllabus of their names and sprouting mono words like cars, trains and buses smoothly.  Prior to that, I still remembered how we would prop ourselves up on our bed, which was next to a bay window on level 24, in the previous apartment and named every single car which whizzed down Pan-Island Expressway.

When he entered pre-nursery, or N1 as some schools called it, at 24months and 1 week old, he was the youngest in class by virtue of his birth date falling in December.  He could not articulate well and I had to prepare a Get-to-know-Z sheet for his teachers to indicate what this little caveman could be gesturing for.

By 27 months’ old, which meant almost less than 3 months’ in school, he was yakking.  He was yakking a lot.  Previously, he was communicating with simple words but at 27 months’ old, he was throwing up a lot of sentences and stories.  That was when Mr Chatterbox started.

In any case, owing to his new found verbal independence and in anticipation of baby X, we potty-trained Z at 30months’ old.  Experienced friends had always taught us that potty training could commence when the child knew how to communicate.

From 27 months till the point when Z turned 48 months’ old, it was a painfully loud journey.  He could talk so much that he would take up the entire talking space, interrupt our conversations, repeat himself non stop and ask a zillion questions, not including all the repeated questions because our answers did not go well with him.  He would cry and take deep breaths, and basically disrupt conversations when we asked him to take a back seat.

For that period, I often wondered what we could do.  It was a very long phase.  While I knew we were not supposed to dampen his spirits, it got on our nerves.  It was so bad that we had to be harsh on some occasions.  It was taking a toll on our sanity too.

Sometimes, we joked that Z should have his own radio channel in future.  I would market him as the only radio station with ONE DJ because he did not need a break in talking.

As magically as it started, I reckoned we might have seen the light at the end of the tunnel!

By 50 months’ old, Z still talked a lot but he held thinking conversations with us.

By 51.5 months’ old, Z handled himself like a budding and interesting conversationalist.  It was delightful to chat with him and definitely funny to see his dramatic reactions such as slapping the forehead in ‘aiyo’ circumstances or giving us -_- looks when I talked about crappy stuffs.

Like recently, he learned that vitamins and fish oil were supplements which he had to take to make himself stronger.  When he was eating corn at Pepper Lunch, he asked, “Does corn make me stronger like supplements?”

“No, corn makes you corny.”

Yes, that was one of those rolled-eye moments from Z.

This had little to do with the song.

As we all knew, kids did not take well to changes in plans.  I used to get Z throwing up tantrums should we have deviation to plans.  He could not understand why changes could occur.  We tried alternating between giving him an explanation or surprising him on the day itself.

Giving an explanation – he would not have it any other way.  It was usually a fruitless attempt.

Surprising him on the day – sometimes, he was so surprised that he was not mentally prepared and would ask a million questions.  We also lost the chance to build up interest.  However, it was still better than nothing.

Recently, we made plans but changed it very last minute.  Z surprised us by understanding and not kicking up a fuss.

I commented, “Woah, the song created miracles.  Z had learnt to let it go.”

Z turned to me and rolled his eyes, “Stop it, don’t say that.”

It would be the Nescafe Dolce Gusto Milo capsules.

Being a marketing professional had attuned my shopping sense.

I told Mr H, “Milo would only be milo but when packaged into a NDG capsule, it could be sold for a premium and a marked up price.”  However, I was a mega milo fan, blame that on brand loyalty or more like the brand which I grew up with, so I still went ahead to spend $10.90 on a box of NDG milo capsules.

In the same grocery shopping, I also looked at –

I actually bought item #2 to #4 in the same grocery bill.  That was how much I liked Milo.

Unfortunately, I was rather disappointed with what I coined as the Atas milo.  It was too milky and sweet.  I preferred the milo powder version or the canned milo  version.  The NDG version did not quite cut it for me.

My mom had cultivated this habit whereby X was supposed to clap his hands if he enjoyed the food.

Of course, having being exposed to this habit from a really tender age meant that he would proactively clap his hands if he found the food nice.  He also knew how to do the thumbs up sign!  Since none of us had taught him that, I presumed he picked this up from school.

It was very cute when he clapped his hands or put up the thumbs sign in appreciation.  He loved eating homecooked food, so it made my day when he did that all the time.

We liked to ask him, “Is the food nice?”  He would pump his fist up with the thumbs up sign.

The underdogs – on wet wipes

A few key brands dominate the baby wet wipes’ market. When I had Z, we stuck religiously to one brand which was Pigeon.

I always had some unfounded fears that cheap wet wipes would cause diaper rash. Blame that on reading too many literature on parenting and the importance of narrowing the root causes.

By the time X came along, I was more liberal in my choices and I actually tried a few brands. There were some sucky ones which had nauseating sweet fragrance or which tore easily. Pigeon was fine but I always found that it was rather thin and sometimes a little too dry to wipe some stuffs… On my lazy days, I actually use wet wipes to clean the playmat, doors, table tops, cushions and more. 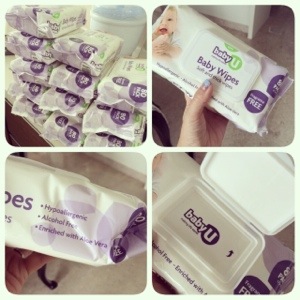 By chance, I tried this Baby U wet wipes from Australia. The packaging looked premium but the price tag was not. It was $3 per standalone pack for 80-pc. Oddly, it was quite reasonably priced.

To my surprise, it was really thick like cloth and was easy to clean with. Today, I saw it on promotion.

I guessed it was one of those times when too little marketing had been done to increase the awareness of such an awesome product that they had to use pricing to increase user base or to clear stocks.

Whatever it was, I hoped it would not exit the Singapore market too soon yet.

The Honey Marquise Vol 1.0
Create a free website or blog at WordPress.com.