We had to drive over to Yarra Valley from GOR and it was going to be a 4 hours’ drive.

Hence, everyone had to wake up at 7am and hit the road by 8am. Z was very sad about leaving the farm because he enjoyed playing with Andy so much.

X, on the other hand, was pretty oblivious but very happy that the cats would not be following him around anymore. He was afraid of the cats because they were so big and kept brushing against him. The cats also seemed to enjoy making him cry! 😂

En route to Yarra Valley, we stopped over at McDonalds to pick up breakfast at 9am. Since we got up so early, the kids snoozed all the way till the foot of Mount Dandenong because we went to Woolworth to buy fish for X’s porridge.

The good thing about having porridge with us was that X could have a proper meal in the car regardless of where we were. Z was old enough to take other snacks but he also liked to tuck into comfort food like porridge at times.

We went to the famed “Pies in the Sky” for lunch and tried their Gold Medal award winning pies. I loved the tandoori chicken pie but could not quite say the same for the Australia meat pie. I was really not a fan of minced meat.

We had a takeaway for the tandoori chicken pie and intended it for breakfast the next day. We backtracked the path to Miss Marple’s tearoom for scones. I had thought that they only served tea snacks but they actually offered main courses too! I was too full so we stuck to the scones.

The raspberry jam was fabulous but I was not impressed with the scones. Give me TWG scones any day.

We went up to the Dandenong Summit. It was a very hot day but it was raining in other regions so we could not have a clear view.

There was a Giant’s chair at the summit

We drove over to Cherry Hills Orchard but was disappointed that it was closed till Nov/Dec. Late October was the season for picking strawberries, not cherries. Even blueberries was in another month or so too.

We hopped over to the nearby Warrantina lavender farm. It was also too early to see any blooming lavender but I did pick up some lavender products and we hung out at the picturesque farm.

The pretty farm, which would probably be a lot more prettier when all the lavender had bloomed

We drove to Healesville because we booked Healesville apartment (18 Symons road) for a 2 nights’ stay. We placed our luggage in the beautiful and clean apartment before heading out to its little town to check out dining options.

I loved this apartment and boy, at A$170 a night, it was definitely a steal.

Z had been complaining of pain during urination since afternoon. We saw a pharmacy and thought we could pick up some medication to ease the pain. However, the dispensary recommended that we bring him to see a doctor instead. Given that it was already 6pm, the main clinic had closed. Though the town was so small, there was a late night clinic a few doors away. We managed to bring Z when it opened at 7pm and it was a suspected case of UTI or skin infection. Either way, Z had to take antibiotics and there was no point for him to do an urine test because the results would not come back in time.

However, the local chemist was closed and we had to drive to Lilydale (15 minutes away) to pick up the medication.

It was already 8pm when we got there. When Mr H left the car to grab the medication, I googled for places to eat in the area and decided that Chinese cuisine would be more appetizing for the poor boy.

We ate at Oriental Paradise which was not too bad. The pan fried scallops was good, so were the other dishes. With a satisfying meal, we returned to Healesville slightly before 10pm. 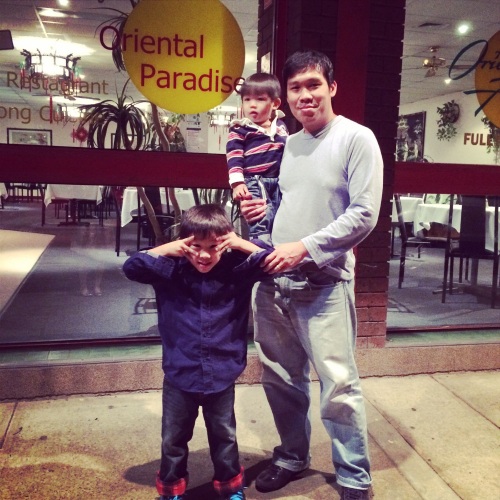 Like Loading...
This entry was posted in Holidays and tagged australia, healesville, yarra valley. Bookmark the permalink.