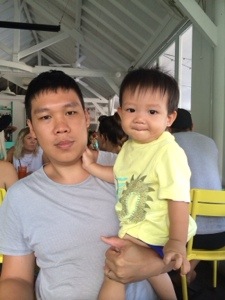 We started the day with breakfast at the nearby Sea Circus. The beauty of staying at W Seminyak was that it was such a fab location and was within minutes to most restaurants. We could have walked but having 2 kids and a narrow or non-existent pavement meant that we cabbed almost everywhere.

Side note: If the hotel called the cab in, we would have to pay the base charge of 30,000rupiah (S$3.20appx). It was not too pricey but the meter often showed the realms of 10,000rupiah. If we hailed a cab off the streets, we only had to pay the meter rate.

We ordered an Egg Benedict’s, standard eggs set and pancakes with bananas. They were all very delicious, so much so that Z actually finished up the pancakes which was no small feat! 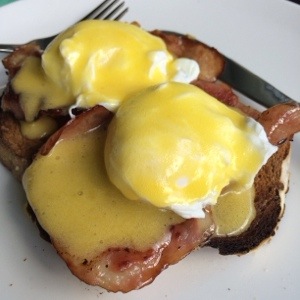 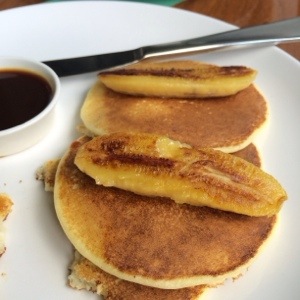 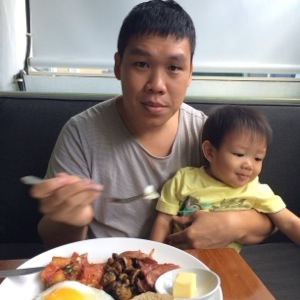 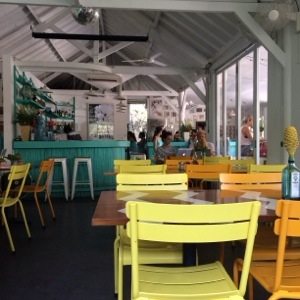 We had such a filling breakfast that we walked to our next pit stop which was Potato head beach club. After considering for a bit, we decided to return to the comforts of our hotel to hang out instead. There was a minimal spend of US$50 to hit if we wanted to use the cabana and 2 towels.

Well, W hotel was less than 100m away from Potato head beach club. Hence, we walked back to the hotel via the beach front. It was blazing hot so we actually watched DVD in the room till we were hungry. We lunched at the poolside and spent the entire afternoon by the pool (where we had endless towel changes, complimentary snacks, attentive pool side crew to adjust our umbrella shade and convenience). 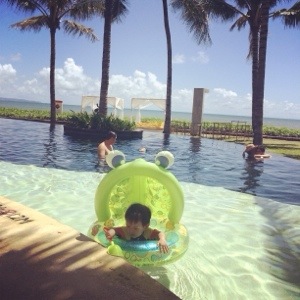 I guessed if you were staying at a full facilities hotel with an awesome pool, it did not really make sense to hit beach clubs in our case.

It was our wedding anniversary day, hence, we wrapped up the pool play by 5pm and headed to Metis for dinner. 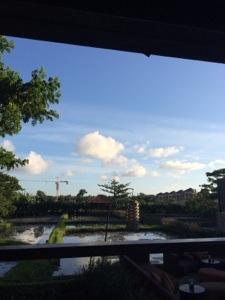 It was a French restaurant and the food was really beautifully done. I had one of the best lobster bisque ever and it was only S$10.50?! 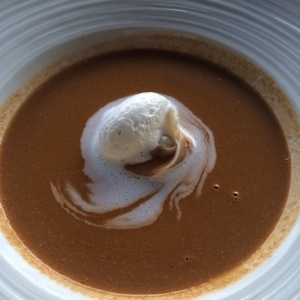 The foie gras was beautifully done too! 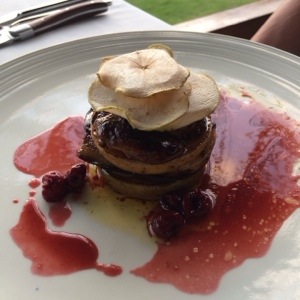 X gave us the best present by falling asleep and letting us enjoy the food in peace. 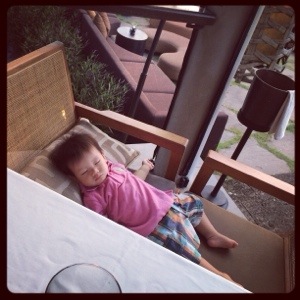 Z was very cooperative too and ate his carbonara up within a reasonable time frame. I had black cod and Mr H had the crispy pork belly. They were both very good. I ended the meal off with a dessert platter. 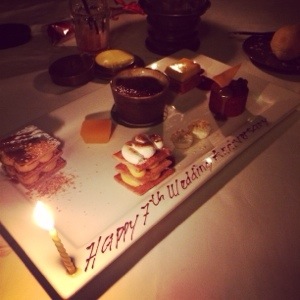 Mr H surprised me with a wedding anniversary cake from Metis! I was surprised but shocked too. I was overstuffed with the dessert platter. The cake was a beautiful and super delicious praline chocolate cake.

With that, our 7th wedding anniversary came to a gastronomica end. It was a happy and hearty day!

We all slept in so late till it was time for Sunday Brunch at Starfish Bloo. It seemed like a major activity at W hotel. Music was on, the staff were chirpy and the mood was great. 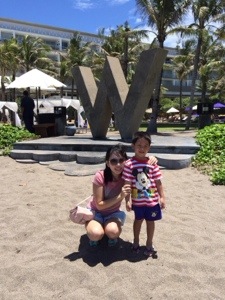 We were 10 minutes early so we walked on the beach a little. 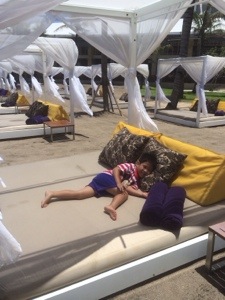 And the brunch began. 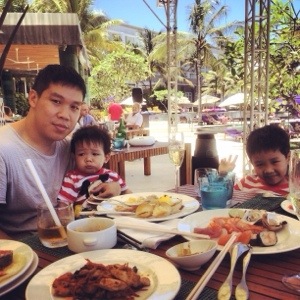 My favorite were these little foie gras sliders! 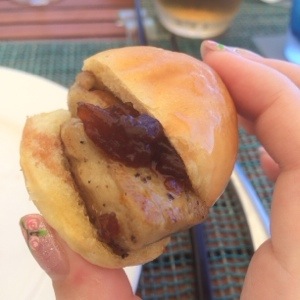 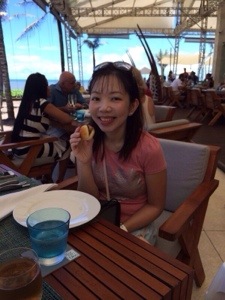 Mr H’s favorites were the fresh oysters and sashimi. Z’s was the dessert station.

We were bursting at the seams by 2ish and walked over to the pool. We could have shuttled to and fro but we were already very full. 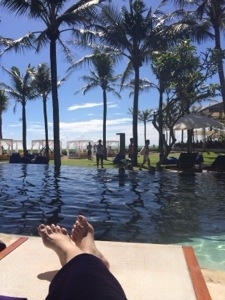 Baby X was a sport. He had his milk by the pool in his wetsuit and fell asleep amidst the towels for blankets. I got to snooze alongside too.

When X was up, we dragged the boys down to the beach where Z official declared that he did not like the sea. It was too sandy, dirty and salty. The waves were pretty strong and hit his face partially. Poor dude, I could not fault his dislike!

We headed back to the room by 530pm and that meant we actually spent a good afternoon by the pool side.

We had dinner at Ku De Ta. Prior to dinner, we made the boys watch sunset with us. They enjoyed the sea breeze and X was very sporting too. Mr H had his beer and I had my first lychee martini in years (from May 2012 to Feb 2014). 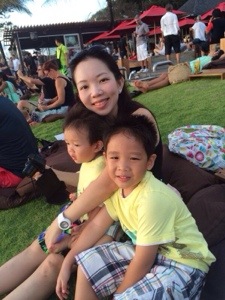 When the sun finally set, we adjourned to the restaurant for dinner. The sirloin steak was good but Z was not too impressed by his chicken penne in basil pesto sauce. One thing which I liked was how most restaurants had a decent kids’ menu. My snapper fish was fine too. X was overwrought and refused to let us dine in peace.

We later discovered his penchant for cabanas. He was happy to crawl about but was upset to be back in the restaurant.

After spending some bits under the starry night and watching the rolling waves from the deck of Ku De Ta, we called it a night.

We took such an early morning flight that we were all snoozing on the plane for the entire 2.5 hours’ flight. We slept so much that only Z did not miss his in-flight meal.

As we had X with us, we were given an early check in. We settled down and headed out for lunch at the much acclaimed Sardine. It was semi-drizzling so the non-sheltered seats were all covered up.

The kids lapped up the risotto well too, with Z declaring that he liked the seafood very much.

By the time lunch was finished, the skies looked clear so we trooped around the ‘paddy fields’ bit. We spotted a few pond skaters and were asked to death why they had such a name. 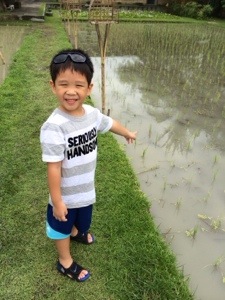 The little pavilion out there 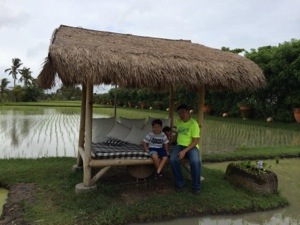 We lounged at the day bed for a bit. 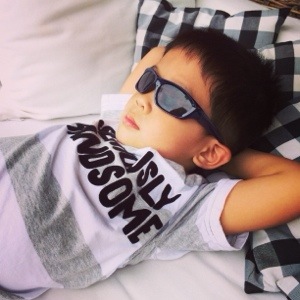 Before Z shooed us back to hotel for a swim 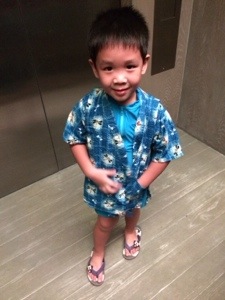 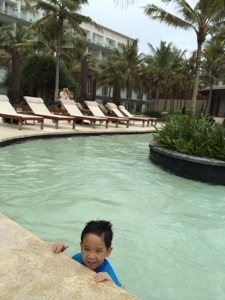 By evening, it was dinner at Biku restaurant and I thought that was really unimpressive. We ordered the local dishes and apart from the mixed satay grill and fried rice, the banana leaf fish and the oxtail soup was so so.

It would seem that going for a beach holiday with kids called for more logistics than had we opted for a wintry one. The bucket, the spade, the floats, the sunblock, the picnic mat and extra clothings for breezing in and out of the pool.

I had my itinerary planned out around beach clubs and food. Thus, I had made all necessary reservations and leaving the other half to play by ear. I had not scheduled any sightseeing bit because I thought we would most likely be just hanging out by the pool.

Well, that bit was odd to reconcile but we shall try!

As per the usual drill, I started packing our luggage more than a week in advance. With kids, we tended to overpack especially if we would not be in the comfort of a service apartment. As a mother, I appreciated the washer and dryer very much. This time round, we opted for the convenience of a hotel.

Most people would opt for villas but I honestly would not want to spend the entire time looking over my shoulder. I had this paranoia about both kids jumping into the pool when we were not looking.

Besides, we needed 2 double beds and I certainly would not be needing a 2 bedroom villa for that purpose.

Meanwhile, it was countdown for the kids. I really loved this period where I could blackmail Z into obedience with ease.