At the end of CNY

What a sure sign of how different both kids were. One was quick to rip open in a messy manner and one was patient enough to line them up to open slowly.

I sure hoped it was a fun period for them. With the conclusion of the lunar new year, it was back to regular meals, a hiatus to Lohei and time for our usual programming.﻿

Towards the end of CNY

We usually would visit Mr H’s nanny’s home. She had babysat him for many years and watched his brother and him grow up.

Z & X – getting pro at visiting 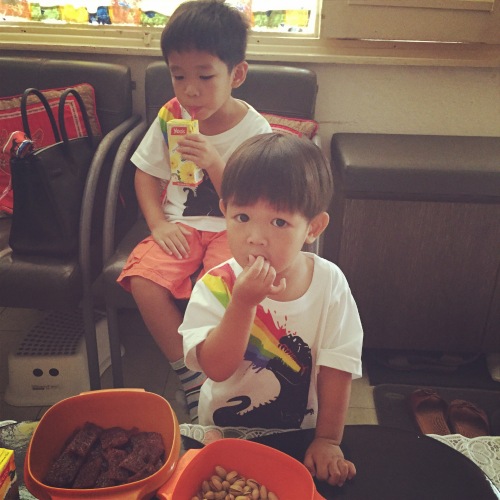 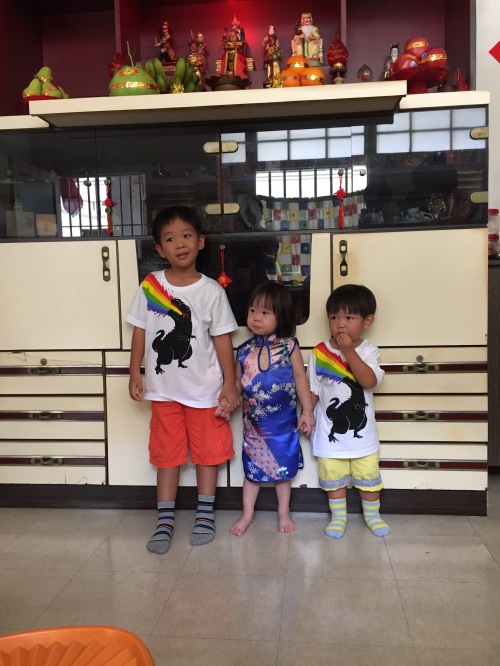 ﻿﻿We visited Mr H’s auntie too! 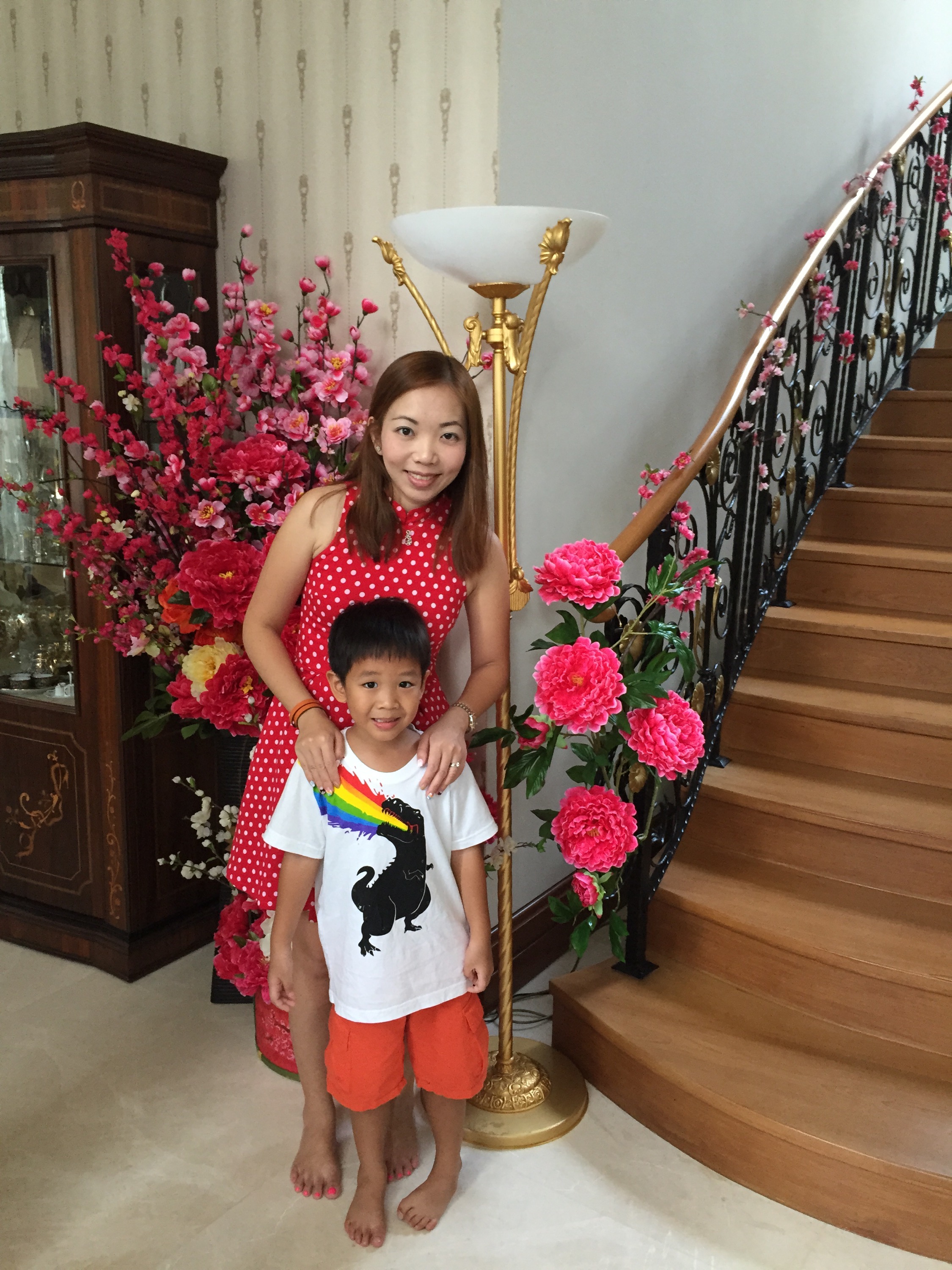 ﻿﻿Another Yusheng for the boys

We had to rush home because my cousins were visiting us.

The day ended with an early “Yuan Xiao” with my folks. – another Yusheng 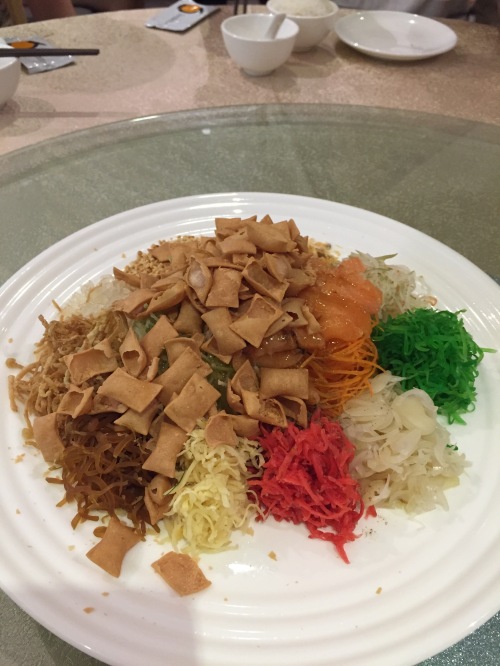 Coming to the end of the lunar new year

With that, the festivities for the Lunar Year of Goat came to an end.

More catching up over the lunar new year

The lunar new year and the concept for reunion served as a good reminder for everyone to get together. Before CNY, I had met up my ex-colleagues from TSP a few times. During CNY, despite being away for a few days, there was time to catch up with an old school senior, a couple more friends and also our favorite family friends. 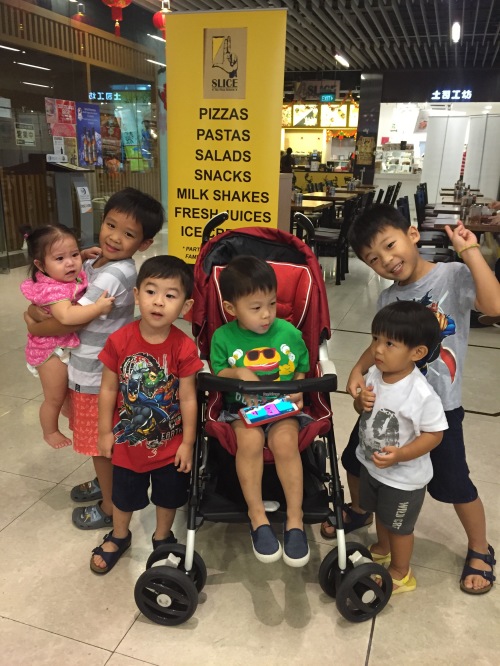 Some turned into mutants though

One of the fun things we did during lunar new year was to have steamboat with friends and their children. We had two boys from the first generation and a bunch of toddlers touted as the second generation.

The day was meant to be fairly simple, chill and chat by the pool. It was always my vision to somewhat do a poolside BBQ in the day but it was always hard to make that happen. This time round, there was a frenzy of activities surrounding the new year and I had no time to prepare. On hindsight, it was a better choice.

I seemed to forget what a handful of toddlers meant. It was unlike the days when we used to meet up when the kids were younger. They were eccentric, demanding and in general, hard to feed. It was a good thing we did steamboat but I guessed it would have been a better thing if I ordered cooked food in.

The calmness after a storm 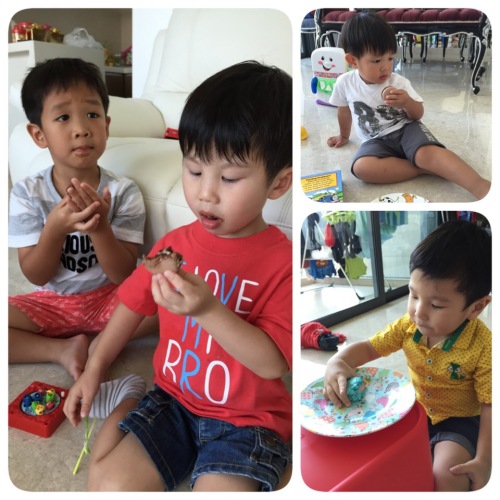 The group of us who had been friends since a long time back, before we were married and mommies 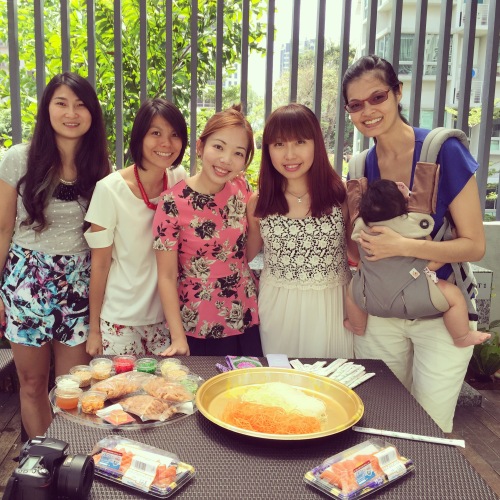 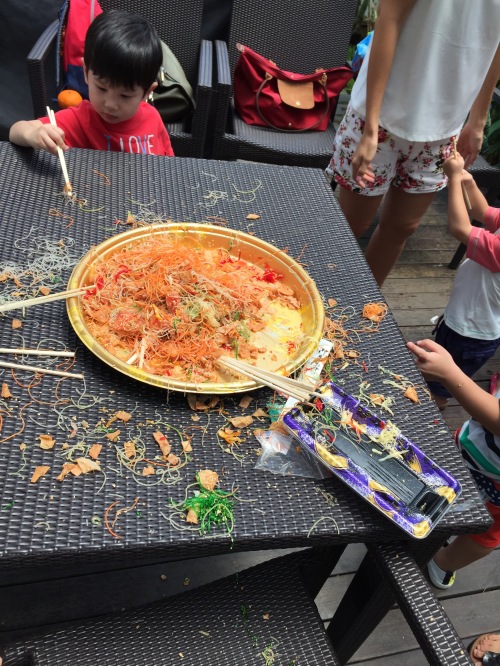 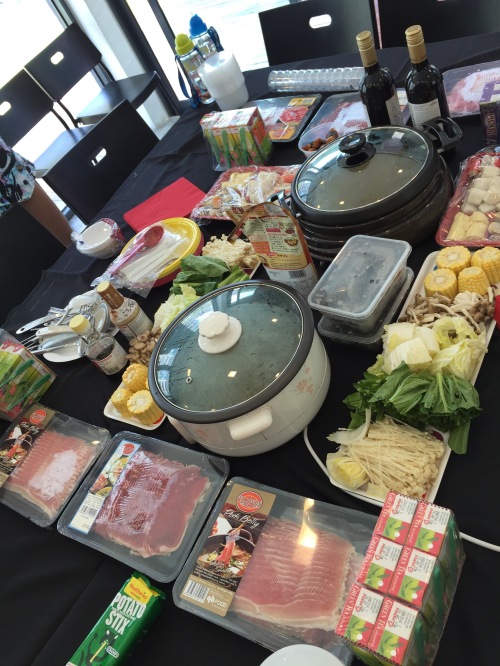 It was quite hard to imagine how fast forward it had been. It did not seemed too long ago when we had hung out during maternity leave, met up with our pregnant tummies or even exchanged wedding tips.

What would our kids say when they grow up too?

As part of the annual tradition, the management office would arrange for a mass Lohei and a lion dance performance. It was pretty fun and given the number of units in our development, it was small enough for it to be a crowded but cosy session.

It was also an opportunity for the kids to get up close and personal with the lion dance troupe.

Z and the lucky numbers

Prior to the performance 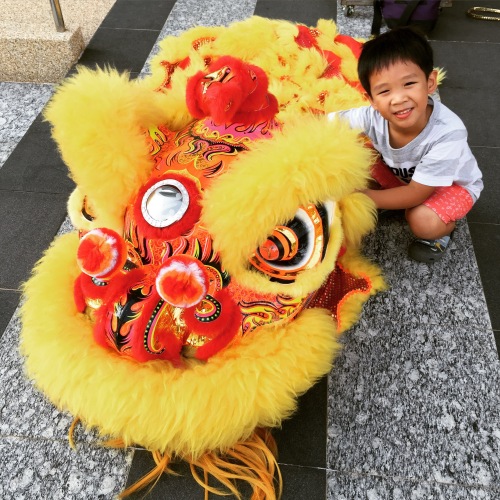 With my gf (as well as neighbour) before the mass Lohei 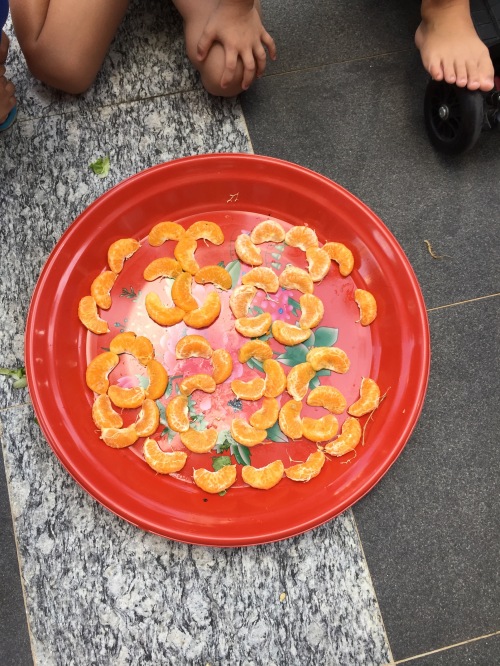 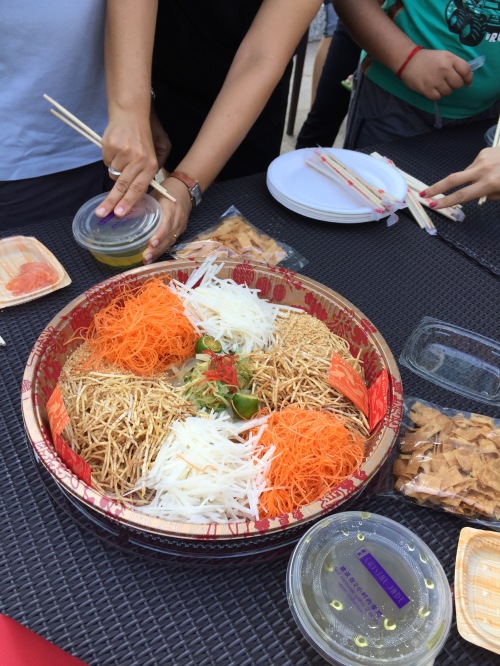 In the lead up to the Year of Goat, our little household had little to prepare. Z welcomed his first Yusheng with gusto but only to lose steam when we had 5 yushengs in one weekend. Lohei was a fun activity where we got to say all fun and auspicious greetings. Z played a role in the greetings too. His favorite was 开门大吉.

Of all the yushengs we had, the one from Jumbo was my favorite.

A sheep Mascot to go with this year’s lion dance

With so much work on the plate (or maybe even if I weren’t busy), I only packed the red packets on Chu Xi after the kids had gone to bed. I had a penchant for pink angpows! 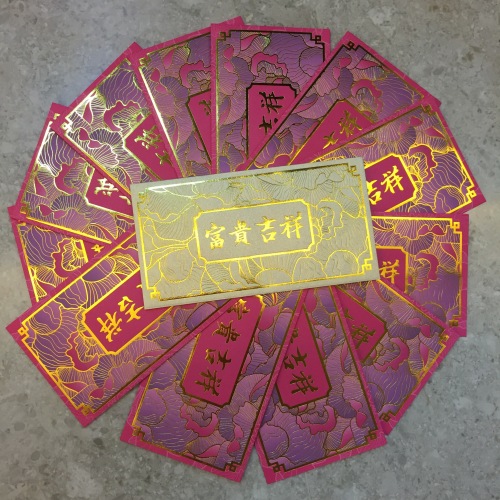 The Disney ones were for Z & X.

Though we did not usually have guests over, I still prepped CNY snacks for standby and for the boys to enjoy the fanfare. Z loved the Kobe Fugetsudo snacks that I tended to buy over CNY. He liked it so much that he asked me to buy during non-CNY period but I rejected his suggestion, citing that it would make CNY more special. I also loved the cheese butter cookies that my mom would buy and the butter crackers that she made. Last year, Joce also recommended this pineapple tarts from Bedok which was so good that I had not looked back since. I would also stocked CNY macarons and bakes from Joy’s Baking & Co.

Featuring some of the many yushengs consumed this period

On the last day, it was so difficult to get the boys out of bed. They played so hard in the past few days that they were catching up on their rest.

Featuring Z who refused to get up!

Z was so sad that the holiday was coming to an end but X was still oblivious.

Boys on their luggages

In their respective window seats 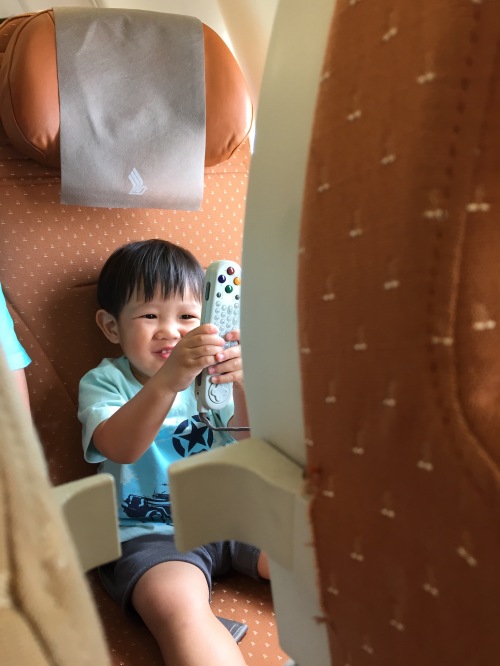 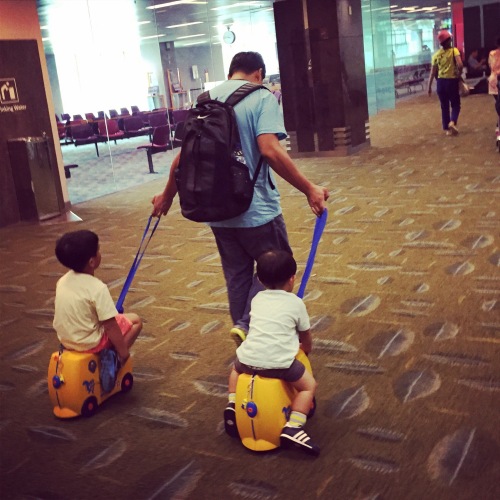 X was such a handful on board that he got kicked to squeeze with Z & I so that Mr H could have his lunch in peace. It was a good trip!

Well, given that I was not a beach & resort sort of tripper, Bali was pretty fun for the family. Let’s see when we would be back again.