X would never leave home without wearing shoes. Wait a minute, even if he was home, he also wanted to wear shoes. I could see his gradual process in learning to walk. He could stand unassisted for 5-10 seconds. However, he was still unsure about walking on his own. The best I could do was to hold him with only one hand, instead of two hands, as he walked.

At almost 14 months’ old (at the point when it happened), he was also enthused about high fives and waving goodbyes. He looked really cute trying to balance and waving with a hand. 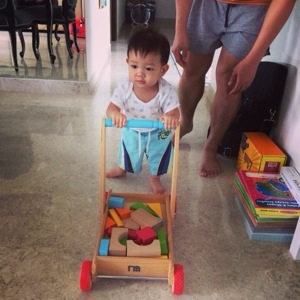 When my little X starts to show interest in walking, I knew he was not so little anymore.

It had been yet another amazing year of bringing up a baby. My heart felt a little tight whenever I saw him looking different every day. 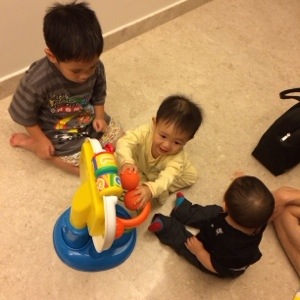 This was simply a day in a baby’s life – hanging out with brother and friend, bonding over baby basketball. Before I knew it, this scene would be at a real basketball court.

At 10.5 months’ old, X had finally been able to lift his butt off the floor, rather marginally, to crawl a little.  Both Z and X were the same.  They took the longest time to crawl on all fours, as though it was too much work for them.

We had to lower the height of the cot bed because X had been able to pull himself up with the assistance of the railing.  He looked like he was going to flip over the cot soon and hence, Mr H reconfigured the cot.

X had been majorly pleased in the past month because he had been able to pull himself to a sitting position.  He had also been seeking more attention and would insist to have an adult sitting next to him whilst he played.  If he was busy with playing and overlooked your presence, he was fine with playing alone.  However, he would conduct a random audit scan, when he remembered, and screamed bloody murder about being alone.

He seemed to understand our conversations and made appropriate responses.

At the moment, his favorite toy were the colourful wooden blocks from Z’s mothercare’s walker.

He could also hold his milk bottle and finished up to 80% of the milk before he became fidgety or tired.

X and his goodbyes

When the car pulled to a stop at the drop off point, I lifted X out of the car seat. It was followed by the most precious moment ever.

He started waving goodbye on his own accord and even uttered ‘bye bye’.

We had been on this ‘say goodbye to Z’ routine for the past 2 weeks. It surprised us that he knew what the action meant and initiated it.

He had also been doing high fives with Z.